A WORLD OF LANDSCAPES,
BREATHTAKING SCENERY AND RICH CULTURE 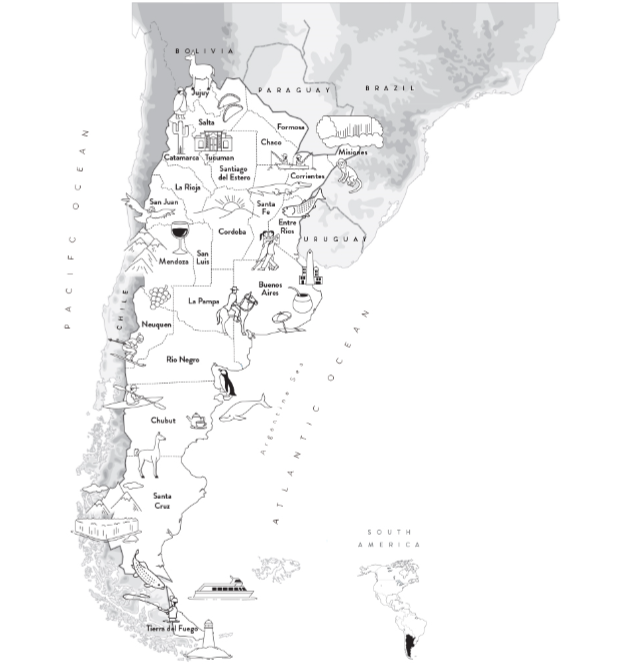 Located in South America, and thus, in the southern hemisphere, Argentina has an area of almost 3.8 million square kilometres. Its border with Uruguay, Brazil, Paraguay, Bolivia and Chile has a perimeter of 9,376 Km, while the territory bordered by the Atlantic Ocean is 4.725 km long. The name Argentina comes from the Latin term “argentum”, which means silver.

Argentina’s main characteristic is the enormous contrast between the immense eastern plains and the impressive Andes mountain range to the west. From Jujuy to Tierra del Fuego, the Andes present marvellous contrasts: the Northwest plateaus, the lake region, the forests and glaciers in the Patagonia. To the north, Chaco is a forested area linked to rivers Bermejo, Salado and Pilcomayo.

Between the Paraná and Uruguay rivers, the Argentine Mesopotamia (provinces of Entre Ríos, Corrientes and Misiones) is formed by low hills, where pools and marshlands evidence the ancient courses of these great rivers. In some places within the subtropical rain forest, there are fissures which provide such spectacular phenomena as the Iguazú Falls.

The Pampas, in the centre of Argentina, is the largest and best-known area of plains. Agricultural and livestock activities are performed in this area, which includes the province of Buenos Aires, the northeast of La Pampa, the south of Córdoba and south of Santa Fe. To the south, the plains give way to small hills in Tandil and Sierra de la Ventana, and to the west, to the Córdoba hills.

Between the Andes mountains range, showered with forests, lakes and glaciers, lies the arid Patagonia plateau or steppe, the last home of dinosaurs. It is an open adventure for everybody: intense in its natural features, both archetypical and appealing, this region abounds in reasons to become a myth. The Atlantic coast, lined with high cliffs, forms massive indentations like the Peninsula Valdés, with its spectacular and unique colonies of sea animals.